Update: Who will be the White House web designer?

A lot of people have wanted to know who designed Barack Obama’s website. With good reason: Obama’s website is beautiful. It even conveys Obama’s message of hope in it’s wistful design. Well, here it is:

From Scott Thomas, of SimpleScott:

I am the creative director of New Media for Obama for America. The team consisted of many people in house as well as many volunteers. Project leads were myself and John Slabyk. We are maintaining site and brand in-house. Sol Sender designed the logo before I joined the campaign.

How did I find out SimpleScott was involved? Just check out Obama’s main style sheet. SimpleScott uses CSSEdit, a great program for Mac CSS web design.

The CSS code gives it away: 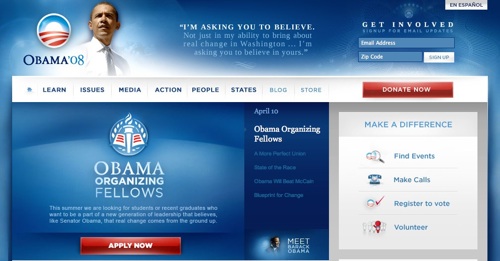 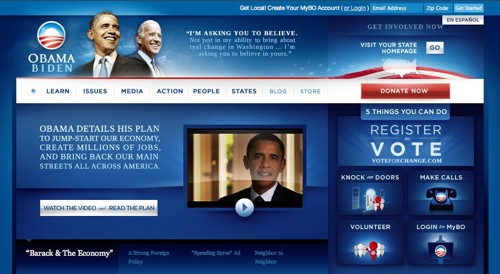 Did you notice there are two authors for Version 3? If you’re like me, you want to know who this Walker Hamilton fella is that is referenced in Version 3 of the CSS.

This is from Walker’s resume at walkerhamilton.com:

I architected and implemented the deployment mechanisms and technologies for the campaign’s various web properties. I implemented various applications to improve some processes, automate others, and facilitate instate/headquarters communications for departments within the campaign. Other duties included general maintenance, day to day content administration, and feature planning and development for the social network tied into the site.

Update: I’ve learned a couple of more people who were involved in the BarackObama.com website:

The Barack Obama logo design is by Sender, LLC

From Brian Drum, of Sender LLC

Sender designed the original mark, but the site is developed and maintained in-house by the campaign’s web team.

Sender was involved *only* with the development of the “sunrise” mark, and had no role whatsoever in the design, development, or maintenance of barackobama.com.

Do you like the design, or not? What aspects work best for you? Drop a line below.

Which design do you like?  I prefer the lighter, more optimistic “Primary Obama” website, not the Obama/Biden serious, solumn “General Election Obama” site. What do you think?

Zack Katz is the creator of GravityView and the President of Katz Web Services. He lives in Leverett, Massachusetts with his wife and cute beast of a cat.

It’s certainly a lovely design. I’m sure SimpleScott will be getting plenty more work coming his way because of this.

I wonder when they’ll decide/be able to post the site in their portfolio.

It is my understanding that Scott only maintains Sender’s creation.

One possibility is that Sender created the original brand and website and SimpleScott.com updated it?

@Corinna & @Zack Sender designed the original mark, but the site is developed and maintained in-house by the campaign’s web team.

Hi Brian, thanks for clarifying, and great job! Do you know how SimpleScott comes in to the picture?

To clarify my clarification: Sender was not involved in the development of barackobama.com, only the campaign logo.

Well, congrats to both Sender/Brian Drum and SimpleScott – this is one of the most nicely designed websites I’ve come across. Also, excellent branding, visual consistency, etc.

Obama website is the best website of any candidate so far. I’m sure later in the future there will be one to compete with it from another candidate, but right now there is no competition. This one beats any of the candidates that ran for the White House. The logo is also the best one so far. Brian, I believe Sender had a little more to do with the logo, just by seeing the CSS file: http://www.barackobama.com/css/globalv2.css

Scott Thomas was involved with the CSS, that’s another step than just the logo. But since i don’t know, I won’t say what else they were involved with.

I’ve updated the article to be accurate; both SimpleScott and Sender have been helpful in clarifying their roles in Obama’s brand and website. Thanks!

Hey guys, excellent review … however Sender & mo/de have had nothing to do with the campaign since creating the initial mark, and the old wordmark.

A friend of mine knows the Art Director over there, John Slabyk … his portfolio is down, but used to be available on humanot.com … now its only available here: http://www.celsiusdesign.net/humanot … from what I understand its basically him and another designer, Scott Thomas (SimpleScott) who carried almost all the code work on his back, his portfolio: http://www.simplescott.com.

John’s basically the branding guy / art lead and Scott is the web ninja / design specialist from what I understand … these are the guys responsible for all the branding and design seen for the campaign.

Ever since I learned that Gotham is Obama’s font (and there are some great articles about Obama’s graphic design), I’ve been seeing it everywhere.

I think it was even in a beer commercial with some forward-looking text like “Drink for tomorrow.” or some such. I laughed.

@Gray – One thing I can’t figure out is why they spent the extra load time on the presidential seal in the middle of the background…other than it looks even more impressive as it loads!

Actually — I LOVE the added fireworks as of last night … very nicely done.

@Katz: maybe there was probably some creative differences between the designer and the people who actually use the site?

I’ve been having this same issue:
http://www.democraticunderground.com/discuss/duboard.php?az=view_all&address=132×6574977

anyone know what it was actually built with? it’s great to know about the stylesheet but is this really all custom programming from scratch by one guy?? was there a framework involved at all for the community stuff? what language/databases? how about the server setup… more more!
-frz

It’s funny that it was designed by that humanot guy.. I’ve run across his non-portfolio I don’t know how many times over the last 5 years. For being completely unadvertised, he sure is popular.

@Allison – I’m not wild about John Slabyk’s portfolio site; I find it unintuitive. I’ve come across it a few times, myself!

@Franz — the community stuff is done by Blue State Digital.

This was an absolutely beautiful website that had a lot of shine to it. Masterful!

Obama’s website was really amazing, it was a part of his campaign.

Movable Type claims to be part of the framework.
http://www.movabletype.com/showcase/
The cart on the site is Volusion.
http://gallery.volusion.com/

[…] for my proposals, I came across two very interesting pieces of information. First is the name of the person who designed Barack Obama’s logo. The other is the name of the company that developed the community-building tools on the Obama […]

Wonderful, that is exactly what I was hunting for! You just spared me alot of digging around. I’ll make certain to put this in good use!

I have been looking for on the internet just for a far above the ground quality custom website design templates regarding to this unique website templates. Exploring in BING I finally reached this fabulous blog, after seeing this blog, i am thrilled to state that I find a well impression came across the very interesting post for custom website design. I will ensure to don’t forget this website and look constantly.

John Slabyk and his company (dodsr.com) are currently involved in legal controversy, where he stands accused of scamming customers of a Kickstarter for creating a set of themed playing cards.

Why isn’t this guy doing the unAffordable Care site?

Good question! Their fundraising capabilities show they can handle it.

Gravity Forms is the single best plugin you can get for WordPress.