Yesterday a crucial security flaw was discovered in the Gravity Forms Directory plugin and fixed immediately. Version 3.5.4.3 was released and takes care of the issue. __Please update immediately__.

For the security of the users still running older versions, we can’t go into what the flaw was, but it had to do with viewing Gravity Form entries without permission, and was severe.

The flaw was discovered by Baruch Moskovits. We released a patch within one hour of the discovery. 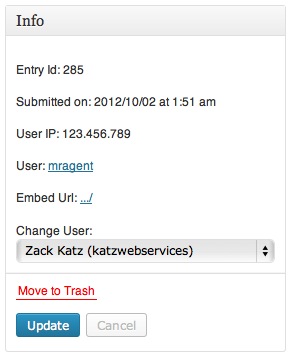 This simple plugin allows you to edit who created an entry in Gravity Forms.

When you have an entry from Gravity Forms that you want to edit, you can edit almost anything, except for the entry assignment; who created the entry.

Activate the plugin and you will see a drop-down input with each user on your site.

Simply upload the plugin, activate it, and you’ll see the drop-down in the Edit Lead “Info” box.